You can't me You! 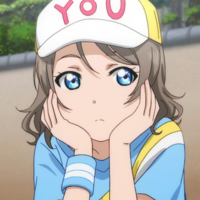 If you're on Twitter on a Monday night, a Thursday, or a Sunday night every month or so, you'll notice that there's a big overlap between anime fans and pro-wrestling fans. Well, that intersection had a very good week. First, on Monday, WWE wrestler Sasha Banks, a Sailor Moon fan who showed her cred with a visit to Viz at the end of September, won her second Women's Championship.

Then, on Tuesday, a fan got a bit of Love Live! Sunshine!! signage on TV. (If you follow/are aware of wrestling, you might have noticed some similarity between Aqours second year You Watanabe's warm-up attire and noted grappler John Cena's gear).

We had a very special guest come visit today! It's WWE's @SashaBanksWWE and she even posed with the Shojo Frame! pic.twitter.com/igEFEiMTcY

Of course I had to stop by @VIZMedia pic.twitter.com/zamm27fuX4

A better look at the signs that made it onto the TV broadcast...

Final sign, see ya at #SmackDownLIVE boys and girls. pic.twitter.com/Ai8lLpC11l