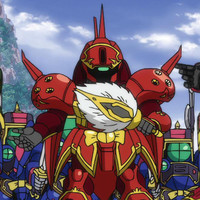 Sunrise's Gundam.Info YouTube channel has posted an announcement that SD Gundam Sangokuden Brave Battle Warriors has returned to streaming for a limited time. The 2010 anime is based on the SD Gundam model kit series' BB Senshi Sangokuden line, which recasts cute takes on the mecha war series as characters and factions from the classic Chinese novel Romance Of the Three Kingdoms.

Mobile Suit Gundam: The Witch from Mercury Prologue to Debut at Comic-Con