Release of Raichu, Vulpix, and Meowth is scheduled for February 2017 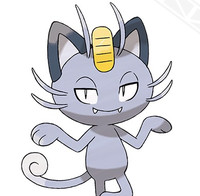 Since Pokémon Sun and Moon's new setting has allowed for Alolan versions of a bunch of fan-favorite Pokémon, that means the merchandising opportunities get to follow suit. Three of them are present and accounted for in plushie form thanks to Banpresto, which will be releasing 12cm-tall stuffed toys of Raichu, Vulpix, and Meowth in February 2017.

Source: Pokéshopper via Nintendo Everything