News announced at this weekend's AkibaFest 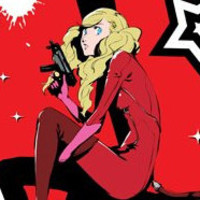 Aniplex of America announced at their industry panel at AkibaFest their plans to distribute the imported Blu-ray of PERSONA5 the Animation –THE DAY BREAKERS– starting February 14 of next year. Pre-orders will begin on their official site on Monday, October 17. This import will be distributed in limited quantities and will be sold only while supplies last.

The latest release in the PERSONA series will feature an all-star cast including Jun Fukuyama (DURARARA!!, Blue Exorcist, WAGNARIA!!) as the Protagonist, Mamoru Miyano (Full Metal Alchemist: Brotherhood, DURARARA!!, VALVRAVE the Liberator) as Ryuji Sakamoto, Nana Mizuki (Blast of Tempest, VALVRAVE the Liberator, WWW.WAGNARIA!!) as Anne Takamaki, Ikue Otani as Morgana, and Tomokazu Sugita (The irregular at magic high school, The Asterisk War, March comes in like a lion) as Yusuke Kitagawa.

About PERSONA5 the Animation –THE DAY BREAKERS–:

The story takes place in Tokyo, the city where people's desires intertwine. As disturbing incidents keep occurring in town, a rumor goes around that a group of people called the "Phantom Thieves of Hearts" has been reforming corrupt adults. One day, when a request letter is delivered to the "Ask the Phantom Thieves Channel," four high school students and one black cat decide to take action.

This is an original animation that links to the original game.

Assiah, the realm of humans, and Gehenna, the realm of demons. Normally, these two dimensions would never intersect, but having possessed all material substances, the demons are now intruding on the material world. But among the human race, there are those who can exorcise such demons—the exorcists.

Rin Okumura kept the fact that he was Satan’s offspring a secret from everyone and decided to become an exorcist. He began his training at True Cross Academy but following the incidents involving Amaimon’s raid, his lineage became apparent. Fearing his true nature and the blue flames marking his connection to Gehenna, Rin’s classmates all distanced themselves from him. Meanwhile, the academy was on high alert when they realized that the “Left Eye of the Impure King” had been stolen! What lies ahead for Rin and his classmates?