Find out the answer to WHO'S THAT POKÉMON on November 1 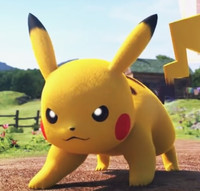 It was just a couple weeks ago that Scizor was announced for the arcade version of Pokkén Tournament, and he officially joined in on the action on October 20. The tease is on again, however, because the game's official Twitter account is preparing everyone for another playable character announcement.

This one is also coming to the arcade version, and we'll find out who that 'Mon is on November 1.