Finally, some "Persona 5" coverage we can understand! 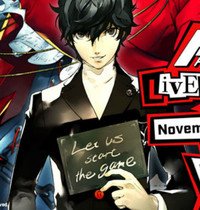 Persona 5's official English release comes on February 14, 2017, which marks the first time English-speaking fans have had a chance to check out the game in a manner in which they can understand.

The first stream will run on November 16 at 3 PM ET on Twitch, as announced via email:

“We’re the Phantom Thieves of Hearts and we’re back to leak some more juicy Persona 5 news! We’ve successfully forced Atlus to finally show the first English gameplay of Persona 5, and they’re going to debut it at their ‘Let Us Start the Game’ live stream event on November 16. We’re warning them to make it the biggest live stream they’ve ever done, so expect special guest, giveaways, and the latest Persona 5 news. Be sure to tune in to http://www.twitch.tv/atlususa on November 16 at 12:00 p.m. PST for the show.”

The game is already available for Japanese fans, but there isn't much longer to wait now for the rest of us!