"Fate/Extella" Rolls Out a Fresh Set of English Character Trailers

Action game launches in the west early next year 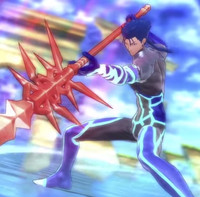 XSEED Games has been pumping out English versions of Fate/EXTELLA: The Umbral Star's character trailers, and we recently go to check out Tamamo no Mae and Nero, followed by Altera. The publisher has since uploaded four more, including Nameless, Gawain, Li Shuwen, and Cu Chulainn.

Fate/EXTELLA launches in the west early next year.