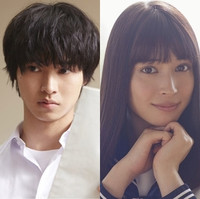 It is announced today that a live-action film adaptation of Honobu Yonezawa's mystery novel Hyouka is in the works for a 2017 release in Japan. 22-year-old Kento Yamazaki is confirmed to play the protagonist Houtarou Oreki, who is in the first year of Kamiyama High School in the novel, and 21-year-old Alice Hirose is cast as the main heroine Eru Chitanda. 40-year-old Mari Asato, who previously worked with Yamazaki in the 2012 film Real Onigokko 3 based on Yusuke Yamada's horror novel series, is attached to written and direct for Kadokawa Daiei Studio.

in the 2014 live-action film based on Hiromu Arakawa's Silver Spoon.

Literature Club series that has printed over 2.05 million copies in Japan. Under the title "Hyouka," the series

was adapted into a 22-episode TV anime by Kyoto Animation and aired from April to September 2012.