In 2013, following the debut of anime feature The Final Chapter, which featured a story by Sorachi, he commented on how much he was making in a bonus Q&A for the manga 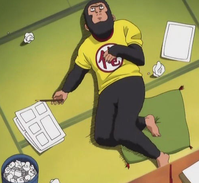 Maybe the box office success of Your Name. has people thinking about the economics of anime movies.  Or, maybe it's the latest burst of live-action adaptations fueling it. Over the past couple of weeks, Japanese social media users have been passing around a Tweet concerning compensation for manga authors when their works hit the big screen.

What's been Retweeted over 60,000 times is a comment from Hideaki Sorachi, the 37-year old author of Gintama, known for illustrating himself as an ape.

In 2013, following the debut of anime feature Gintama: The Movie: The Final Chapter: Be Forever Yorozuya, which featured a story by Sorachi, he commented on how much he was making in a bonus Q&A for the manga's volume 51.

I have a question. A while ago, my mother heard that the Gintama animation film was a big hit, and commented that “(Hideaki Sorachi) must be living at [luxury highrise] Roppongi Hills since it’s so popular”. Is that true?

A:
To tell the naked truth, regardless of how many people watch the film or how much the gross earnings are, not a single yen goes to the author. We are only paid an upfront license fee. The amount we’re paid is peanuts in comparison to the overall box office gross. The majority of the profits go to filthy unscrupulous companies such as Shueisha and Sunrise. Releasing individual manga volumes is way more profitable.

But the reason why I slog to fulfill these film adaptations, to the extent that I’m peeing blood, is because there is a place in this world that is more wonderful than a mansion at Roppongi Hills. And that place, ma’am, is in your heart.

If Gintama can reach the hearts of the masses, I wouldn’t mind living in a hill made of cardboard. The authors are the only ones who harbour such honest intentions with their creations.

So ma’am, if you’re feeling sorry for us, don’t just watch the movies, but also buy our books so that we can live at Roppongi Hills with the publishing royalties.