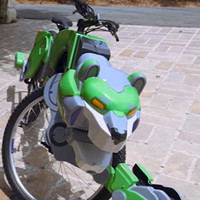 Super-Fan Builds goes out of their way to make amazing, one-of-a-kind collectibles for super-fans based on their favorite fandoms. In their most recent episode, they put together some special gifts for Ben and his father Richard. Richard was a fan of the original Voltron series, and introduced his son to the new Dreamworks series, which they watch together.

The two enjoy outdoor activities, so the team came up with something they could make use of together: a pair of bicycles modeled after two of the new series's lion robots.

Check out the process, the fans, and the reveal:

The bike modifications were designed and constructed using 3D models provided by Dreamworks, and were built from wood and ABS plastic painted with automotive paint. Both were tested out to make sure they not only looked great, but were also safe and easy to ride.

Needless to say, Ben and Richard were thrilled.