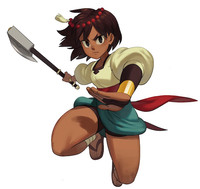 Skullgirls developer Lab Zero successfully funded action-RPG Indivisible last year on Indiegogo, after which publisher 505 Games matched the rest of the development budget. A free prototype is currently available for Windows, Mac, Linux, Steam, and PlayStation 4, and Lab Zero is cooking up something really special for the final game's opening animation.

To make the opening shine, Lab Zero is enlisting the assistance of animation studio Titmouse (Metalocalypse, Venture Bros., Superjail!) and anime studio TRIGGER (Kill la Kill, KIZNAIVER). Titmouse will storyboard the opening, and TRIGGER will then execute the final product and showcase a behind-the-scenes look at the production.

And a synopsis of the game:

Indivisible stars Ajna (AHZH-na), a girl who sets out on a globe-spanning journey to discover the truth behind her mysterious powers. On her quest, she is joined by a diverse cast of unique heroes, who grant her new abilities to traverse the environments and defeat the enemies they encounter along the way. Built around the colorful characters and deep gameplay Lab Zero is known for, Indivisible takes a fresh spin on action/RPG gameplay, featuring a storyline inspired by Southeast Asian and other world mythologies. Lab Zero’s trademark feature-quality 2D hand-drawn animation and a lush soundtrack from legendary Secret of Mana composer Hiroki Kikuta further enrich and enhance the game.

Lab Zero is also celebrating the one-year anniversary of Indivisible with a dynamic theme for PlayStation 4. It's currently available for all to download for free.