Also, Shigeru Miyamoto jams with The Roots on the "Super Mario Bros." theme 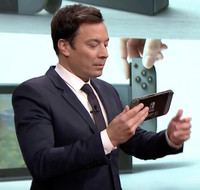 Last night's episode of The Tonight Show was Nintendo-loaded thanks to an appearance by Nintendo of America President Reggie Fils-Aimé and Mario creator Shigeru Miyamoto. Naturally they took the opportunity to demo Mario's mobile debut, Super Mario Run, but after that it was time for a little surprise. Reggie gave Jimmy Fallon the opportunity to check out the Nintendo Switch in its first live demonstration, which included a sampling of The Legend of Zelda: Breath of the Wild.

Even better, though, is Miyamoto jamming the "Super Mario Bros." theme with The Roots.