Project Unveiling event reveals the next step for the original series 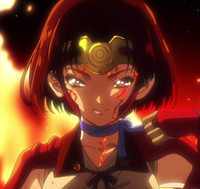 This week Fuji TV held a noitaminA Project Unveiling event and live-streamed some new announcements, including the next step for Wit Studio's Kabaneri of the Iron Fortress. For those who couldn't get enough of the 2016 anime, a followup has been confirmed, with a premiere scheduled for sometime in 2018.

There aren't too many details on Kabaneri's return at the moment, but director Tetsuro Araki clarified that it will be an animated production. Prior to that, fans can look forward to a pair of compilation films and a drama CD that continues the TV anime's story.

Amazon streamed the original series earlier this year. Here's how they describe it:

During the industrial revolution, mankind is threatened by a sudden emergence of undead monsters who can only be killed by piercing their heart through an iron plate. Those bitten become one of them. Called “Kabane,” these monsters exploded in number. The Hinomoto people built fortress stations and barricaded themselves inside. Only steam locomotives, the Hayajiros, can travel between them.

UPDATE: There's also a promo for the announcement featuring footage from the original series:

Kabaneri of the Iron Fortress Movies Speed Over to Crunchyroll Today