Singing, dancing, Elizabeth, and a jab at "One Piece" are all part of the 2017 package 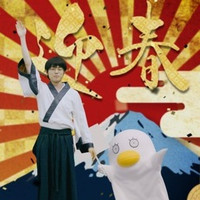 The new year has officially begun, and the cast of the upcoming live-action Gintama film are helping to celebrate with a little song and dance routine. The video features Kanna Hashimoto as Kagura, Shun Oguri as Gintoki Sakata, Masaki Suda as Shinpachi Shimura, and Elizabeth as himself.

In the video, the performers wish the audience a happy new year and sing a Gintama-themed song that promotes the upcoming movie and steals a page from One Piece by claiming they're doing it to become King of the Pirates.

The live-action Gintama movie is directed by Yuichi Fukuda. It hits theaters in Japan in July of 2017.