Equipment from late-night tokusatsu series will arrive on January 17 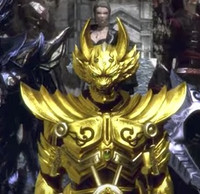 Square Enix announced another collaboration during the recent Final Fantasy XIV: A Realm Reborn FanFest in Tokyo, and this one is set to bring in some style from late-night tokusatsu series Garo. The collaboration celebrates the upcoming debut of Garo's Zero: Dragon Blood series, and will include armor, mounts, and weapons. The content is set to hit servers worldwide on January 17, excluding the separately-run Korean and Chinese servers.

Players will be able to win armor and outfits in the Gold Saucer. Other items will be available as PvP rewards, and mounts will be doled out as in-game achievements. Some of the goodies to look forward to include Garo, Zero, Kiba, and Dan armor; Reo and Rekka outfits; Goten, Ginga, and Raigo mounts; and Kiba Okami's sword.

You can see a sample in the trailer:

FEATURE: Let's Meet The Director Behind the Action-Packed God of High School!