It's a running gag, mostly seen on book cover, that Sword Art Online's Silica and Lisbeth, and later Leafa, and later Sinon, petition to creators for "More Deban (screen time)" 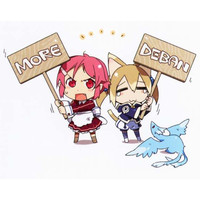 It's a running gag, mostly seen on book covers, that Sword Art Online's Silica and Lisbeth, and later Leafa, and later Sinon, petition the creators for "More Deban (screen time)." Well, they will be getting some, and that screen's going to be pretty large because, according to an interview with creator Reki Kawahara in Sword Art Online Magazine volume 2 and the latest Dengeki Bungo Magazine, the girls, particuarly, Silica, will be featured in anime movie Ordinal Scale.

Kawahara: I was not aware of this while writing the story, but Liz's and Silica's screentime has increased. I even had 120 minutes to work with, so their screentime increased rapidly as I fleshed out the story. Particularly, Silica became a rather important key character.

Referring to as Sayaka Kanda as Yuna: the diva of Ordinal Scale (inspired by Avril Lavigne according to staff at event presentation) and Rina Hidaka as Silica

——I have heard that you watched the post-recording; how was it?

Kawahara: It might be a thing of nuance, but I feel like there's a difference in the performance of movie actors and anime voice actors. Maybe it's because of the anime-like exaggerations, but it feels more vivid. Particularly, there is a scene where Kanda-san, playing the role of Yuna, sings during the movie, and it was amazing. As for the song, even I have not heard the full version yet. There is a scene in the movie where Silica sings Yuna's song in a karaoke. I have scene the post-recording of that scene and I still feel impressed by how Hidaka Rina sang it in Silica's voice. I am looking forward to hearing the real Yuna's song sung by Kanda-san.

And for the Asuna fans

—Aside from the introduction of an AR game, were there any other changes from the initial draft?

Kawahara: Asuna had a considerable increase in importance. At first, it was a story of Kirito fighting against the mastermind's plot, but then producer Kashiwada (Shinichirou) said "more Asuna" at a meeting. Since then, Asuna's role became bigger and we decided to depict the relationship between Kirito and Asuna in more detail.


——So, you will be delving further into the relationship between Kirito and Asuna in the SAO movie?

Kawahara: Seeing as SAO is getting a movie, I wanted to express their relationship in more detail. When I wrote about it, thinking "Will this do?", and then saw the storyboard, I felt that it went further than expected (laughs). I am truly glad.

Read more of the interview here.