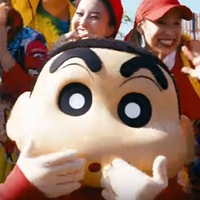 But the festivities have already begun, starting with a new remix of the theme song -- and a video to match. (Note that the first half of the video has heavy flashing light and stroboscopic effects, which stop at approximately 1:50.)

The remix, titled "Ora wa Ninkimono 25th MIX," was created by Hyadain, who wowed Niconico fans with video game remixes before outing himself as established composer Kenichi Maeyamada when he wrote the Nichijou openings. The video was choreographed by dancer TAKAHIRO, and takes the crazy dance out on the road to schools, playgrounds, and stations.

Tags
crayon shin-chan, music video, takahiro, hyadain
« Previous Post
Hideki Kamiya's "Scalebound" Game Has Been Cancelled
Next Post »
Official "Pokémon Sun & Moon" Hoodies Dress You Up Like the Starters
Other Top News
0 Comments
Be the first to comment!
Sort by: