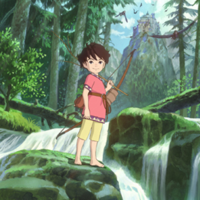 Last fall, Studio Ghibli revealed that English dub work was being finalized on the 3DCG adaptation of Swedish author Astrid Lindgren's children's fantasy novel Ronja the Robber's Daughter from Goro Miyazaki, the son of Hayao, and Polygon Pictures, in cooperation with Ghibli. And, plans were announced for the series to stream on Amazon's Prime Video service. With it now set to launch on January 27th, Amazon has posted a trailer.

Presented by Studio Ghibli. The daughter of a professional robber, Ronja realizes the complicated nature of her father’s profession when she befriends Birk, the child of a rival tribe. She struggles to balance this friendship with her family relationship but comes to understand, how differences can be overcome with the help of love and understanding.

The epic 26-part story of a ten-year-old girl born on a stormy night in a mountain fort, surrounded by her parents and a loving band of robbers. She grows to be a strong and active girl, and discovers that the forest is both a beautiful and frightening place inhabited by strange creatures. She befriends the son of her father's rival and so begins the drama of her friendship and family loyalties. We watch as she explores and understands these key factors in her life, and discovers that seemingly irresolvable choices can finally be made with the help of love and understanding.