"Actually, I Am..." Manga Heads Towards Conclusion 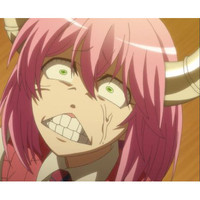 This week's chapter of Eiji Masuda's 2013 supernatural relationship comedy series, known as Actually, I Am..., My Monster Secret or Jitsu wa Watashi wa, has announced plans to end in another four chapters. If it is present in every issue, this would place the conclusion in the Shonen Champion out February 16th.

Asahi Kuromine is a high school student who supposedly cannot keep a secret. One day he spots his crush Yoko Shiragami, unfurling a large pair of wings from her back. She explains to him that she is a vampire and is only able to attend a normal school on the condition that no one discover her true identity. Asahi swears to keep her secret but finds it hard to maintain seeing as how Yoko herself is an airhead and Asahi's friend Mikan keeps bullying the two of them