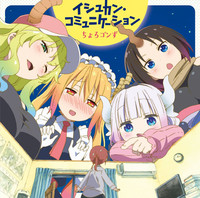 Funimation's next addition of their winter 2017 SimulDub lineup, Miss Kobayashi's Dragon Maid, premieres on February 1st at 10:00pm ET. Preparing for the launch of the anime adaptation of Coolkyoushinja's monster girl manga, the series' English dub cast has been announced.

Miss Kobayashi lives a perfectly normal life until she stumbles upon a dragon—who turns into a cute maid girl named Tooru?

Tags
miss kobayashi's dragon maid
« Previous Post
Kazuma Kicks Butt in "KONOSUBA" Bluray Bonus Action RPG
Next Post »
Is "To Love-Ru" Manga About To Continue With New Name?
Other Top News
0 Comments
Be the first to comment!
Sort by: