Shout! Factory will release the film in North America this summer 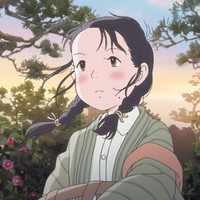 Following the choice by over 100 film critics and journalists last month, the readers of Kinema Junpo, Japan's oldest film magazine that began publication in 1919, also selected the anime film adaptation of Fumiyo Kouno's award-winning manga Kono Sekai no Katasumi ni/In This Corner of the World as the best Japanese film of 2016. The director of the film, Sunao Katabuchi is also awarded as the "Best Japanese Director" by the readers' vote. The Best Foreign Director Award goes to Clint Eastwood (Sully).

This is the first time in 17 years for an anime film to be selected as the best film of the year by the magazine's readers since Hayao Miyazaki's Sen to Chihiro no Kamikakushi/Spirited Away in 2001.

As reported, Shout! Factory has secured all distribution rights of the film in the U.S. and Canada, and plans to begin its theatrical release in the summer of 2017.