Narita previously wrote 2012 Bleach tie-in Spirits Are Forever With You, and has another, about Shūhei Hisagi, coming this spring 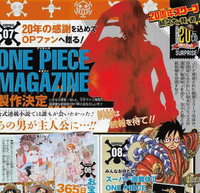 Earlier this year, as part of the 2017's 20th anniversary year One Piece suprises, Shonen Jump revealed plans for One Piece Magazine with feature  serialized novel with Ace's backstory story, including his depature from Mt. Colubo, formation of the Spade Pirates, and early meeting with Jinbe, leading to his time as a Whitebeard Pirates commander. It looks like the writer of this of this might be Ryohgo Narita Ryohgo Narita (Durarara!!, Baccano).

Narita previously wrote 2012 Bleach tie-in Spirits Are Forever With You, and has another, about Shūhei Hisagi, coming this spring.

Now, One Piece's editor has teased a look at their desktop, featuring a folder with Ryohgo Narita's name on it...

OP editor Naito uploaded a pic including his desktop screen I wonder what kinds of info is included in OP_RANK folder... pic.twitter.com/bVGKG9Zf2J

On editor's desktop screen, there's a folder named Ryougo Narita, novelist. He might be responsible for Ace's novel in ONE PIECE magazine. pic.twitter.com/rt6Mg5tl1b