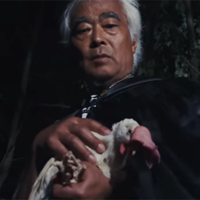 Several years ago, Takeo Ischi, a Japanese yodeler who achieved popularity in Germany, found fame on "the weird part of YouTube" when the music video for his song "New Bibi Hendl" began getting circulated.

While memes come and go, the Gregory Brothers never forget. The team behind "Autotune the News" and the theme to The Unbreakable Kimmy Schmidt is currently producing Song Voyage, a series in which they travel the world making their weird and wonderful music creations. Their stop in Japan, titled "Chicken Attack," takes the form of a classic martial arts film -- and features Ischi as a mysterious caped benefactor who exacts justice with the help of his transforming ninja-chicken familiar. (And a bit of NSFW language.)

The video also features Narashino Seiryukutsu, a member of the Musashi Ninja Clan.

Song Voyage was co-created by Portal A, Maker Studios, and The Gregory Brothers and is featured on THE STATION by Maker, an online home to original sketches, musical comedy, vlogs and more, with a nonconformist approach to content -- LOL with just the right amount of WTF.