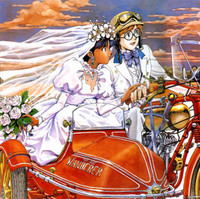 In September 2016, Eldur_380 from OtaCrew had a chance to speak to Gainax cofounders Yoshiyuki Sadamoto (character designer on Evangelion, FLCL, Wings of Honnêamise, Nadia) and Hiroyuki Yamaga (director on Honneamise, Mahoromatic, Magical Shopping Arcade Abenobashi). Now published online with translation by Wave Motion Cannon,  this in depth interview features the veteran creators speaking about the state of Gainax, Honnêamise sequel Uru in Blue and more.

In regards to Uru in Blue

Yamaga: Well, right now we’re re-designing a strategy to sell it, so I guess writing will start at the beginning of next year, and what I’d like to do is, gather students to make a design section dedicated to marketing.

Sadamoto: Aaah. Well, it’s another studio so I don’t know the details either, but the director was decided, and now I guess they’re working on the script. That’s more or less where they are. Besides, for the characters, there were talks about what kind of characters there would be, and I just received the first command for the designs. And I’ve not sent the drafts yet. (laugh)

Are you only doing the designs or a little more?

Sadamoto: At first they wanted to make Haruko’s character appear, you know, the heroine of the first series. They wanted to use her in FLCL 2, so they asked me if they could use my name, and I attended the meeting for that purpose. Then they showed me all the characters there would be, and asked me how many I could handle. So… it’ll be impossible for me to do all of them, but I’m willing to help with some of the main ones.

So you won’t be doing key animation?

Yamaga: Well… if they give us work I guess it’s possible, but participating or not are words that don’t really bear meaning in the industry. Everyone delegates work, so we cannot know if someone participates or not until it happens.

Can you give us a prediction for the release date?

Yamaga: The only thing I’m sure about right now is that I have to finish writing this until the end of the year to then write the script for Uru.

Sadamoto: It’s  only a project for now, more or less.

Yamaga: But I think once it starts moving on, what follows will be smooth, and it should be quite easy to collect funds for this one.

Sadamoto: At least more than Akubi. Projects which move do so quite fast.

Gunbuster 1 and 2 were completely different stories, so will 3 be different as well?

Yamaga: I’m trying to make it so that it ties 1 and 2 together, but I’m writing it right now so… it’s quite difficult.

So I guess Sadamoto-san will be in charge of the designs?

Yamaga: I can’t really tell for now, I’m just writing the script on my own, so I’ve not thought about it yet, I’ll do that once the plot is done.

Are the characters from 1 and 2 going to appear?

Yamaga: No, they won’t. Maybe very briefly, but they’re not a part of the main cast. It’s an entirely different story. Yet I’ll try to make the link on the SF aspect.

Yamaga: Actually, there’s no real need to sell the rights to Trigger. In short, as long as there is a project, it doesn’t really matter who owns the copyrights, it’s all the same. People tend to misconceive this, but you can’t make something just because you own the rights. The rights move from one hand to the other on another level, so it makes no difference where the rights are when we’re creating something. People tend to think that we can make a work by just having the copyrights, but that’s not the case. That’s why for FLCL or anything else, who owns the rights doesn’t really matter when we’re making or planning something, as long as it’s not some ill-willed tier who refuses to let a certain studio make it. So TRIGGER doesn’t need the rights for Panty&Stocking to make a new one.