Both series previously made an appearance in Generations 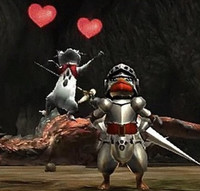 The Monster Hunter franchise has had a ton of collaborations with other games in the past, and a couple will be making a return visit in the upcoming Monster Hunter XX. On the latest Capcom TV episode, the team announced that both Fire Emblem and Ghosts 'n Goblins—which were featured as collabs with the previous game—are coming back for more.

Like before, these crossovers will include various themed costumes for both Hunters and Palicos. Monster Hunter XX hits Nintendo 3DS in Japan on March 18, so expect the new collaborations to arrive sometime after its debut.