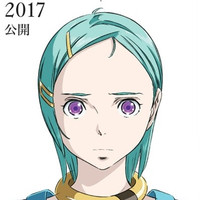 The official website for Bone's Eureka Seven anime franchise today revealed Eureka Seven Hi-Evolution, the three-part film project based on the 50-episode first TV anime series aired from April 2005 to March 2006. A 50-second teaser for it is now also available on YouTube. The tune "Acperience 7" in the clip is newly provided by German electronic music duo Hardfloor.

The trilogy will again feature the two protagonists of the first TV anime series, Renton Thurston and

Eureka, but will also introduce the "First Summer of Love" incident that occurred 10 years before the

TV anime story and was never directly illustrated in it. The site says that it will not be a remake or a

remix, and all dialogues will be reconstructed. With newly filmed and produced footage, the trilogy will

show a totally new ending "nobody has ever known."

writer), and Kenichi Yosida (character designer) are set to return. It is, however, still not confirmed if

Axel, past away in 2012). The first film is scheduled to be released before the end of this year, then the