The anime is scheduled for an April 8th release in Japan 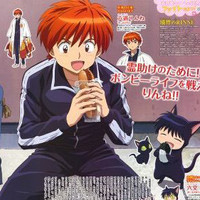 The anime adaptation of Rin-Ne is coming back for a third spring season, and Sentai Filmworks has announced that the series' will be part of their season line-up. The anime  is scheduled for an April 8th release in Japan. It will soon be available to stream on select digital outlets for the Spring 2017 simulcast season with a home video release to follow.

Based on the original manga by famed manga-ka Rumiko Takahashi (Inuyasha, Maison Ikkoku, Ranma ½), the series will be directed by Hiroshi Ishiodori (RIN-NE; Kiss Him, Not Me). Brain’s Base (Natsume’s Book of Friends, My Teen Romantic Comedy SNAFU) returns to handle animation production for the third season of RIN-NE.

They describe the anime

Rinne Rokudo, Rokumon, and Sakura Mamiya are back for more misadventures in a story that pairs school life with the afterlife.
Saving lost souls on the tightest budget known to man is only a day’s work for half-human, half-Shinigami kind-of-thing Rinne! Together with the almost too-collected Sakura and his black cat Rokumon, life continues as normal as Rinne helps guide the dead to their final rest. However, new transfers are never a good sign, and a popular fortune teller ends up at Rinne and Sakura’s school as their new teacher. Things get chaotic when a strange girl wielding a scythe makes an appearance, and Rinne realizes that he might discover a major piece surrounding the mystery of his past.

Tags
rin-ne
« Previous Post
"Re:Creators" Anime Jams Its Theme Song in Brief Commercial
Next Post »
"Interviews With Monster Girls" Gets A Send-Off In Pair Of Anthologies Featuring Tributes From "Prison School" Author And More
Other Top News
3 Comments
Sort by: