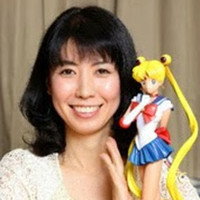 Ahead of geting her own movie this summer, the new Gal Gadot Wonder Woman already showed up in Batman v Superman: Dawn of Justice. So, a voice actress has already been cast as the character for the Japanese dub.  If they're going to be consistent, it'll be Yuko Kaida (Gintama's Tsukuyo). However, for the promo introducing the character concept, they tapped a super-recognizable voice actress. Sailor Moon herself, Kotono Mitsuishi!