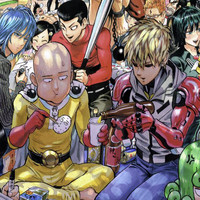 Last September, One-Punch Man cast Makoto Furukawa, Kaito Ishikawa, Yuki Kaji, Aoi Yūki, and Saori Hayami, along with theme song performers JAM Project and Hiroko Moriguchi, reunited for a Fall Festival event that revealed the second season of the TV anime adaptation of ONE and Yusuke Murata's web manga had been green-lit. Now, an update reports that the anime is in production.

How far along the second season is and when to expect it are still unknown.

Production is in progress. Exact date is TBA.
(This scan is pretty bad btw) pic.twitter.com/yIVuASsa6U

Elsewhere, cover art for volume 13, due out in Japan April 4th, has also been previewed.

Tags
one-punch man
« Previous Post
"18if" Anime Visual Draws Out The Mystery
Next Post »
Kanna Gets Her Due As "Miss Kobayashi's Dragon Maid" Manga Spin-Off Collected
Other Top News
32 Comments
Sort by: