They are planning a limited theatrical screening this year, with details to be announced later 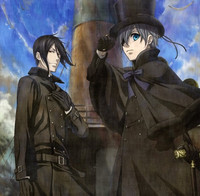 Funimation announced at this weekend's Anime Boston that the distributor has licensed Black Butler movie Book of the Atlantic. They are planning a limited theatrical screening this year, with details to be announced later.

They describe the feature, which covers the Ship Voyage arc from volumes 11-14 of Yana Toboso's manga:

Ciel Phantomhive and his demonic butler, Sebastian, are back! And this next case has Ciel and Sebastian treading some rough waters. Aboard the luxury liner Campania, the two investigate an illegal human experiment that involves resurrecting the dead. But the closer they get to the truth, the closer they are to their own deaths! Will this be their final case or will one hell of a butler keep them afloat?”

Black Butler "Yorinui" Stuffed Dolls will Always Be There for You