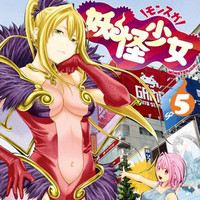 Seven Seas Entertainment has announced the acquisition of print and digital rights to Kazuki Funatsu's manga series Yokai Girls, which they describe as a "sexy action-comedy of monster (girl) proportions!" Volume 1 will be released in print on November 7, 2017 for $12.99 USA / $14.99 CAN.

If you're an industry watcher, it's noteworthy that the manga, also known as Youkai Shoujo - Monsuga, is from Shueisha's (part owner of Viz) Young Jump.

Nishizuru Yakki has always considered himself a fairly normal guy--he’s graduated from school, works a part-time job, and has never had a girlfriend. Yet he does have one unusual ability: he can see yokai spirits! He usually copes with these ghostly visions by ignoring them...until he meets a mysterious young woman named Rokka. Now his normal days have taken a notably abnormal turn, as Yakki finds himself the sole defender of some sexy supernatural yokai!

“This is a really fun manga series with fantastic art,” says Seven Seas publisher Jason DeAngelis. “As the title suggests, it features a unique spin on the now-familiar monster girl genre, but with yokai girls! We’re proud to expand the list of titles we publish--both with new genres, and with the genres our audience has told us loud and clear that they enjoy.”