Sequel in advanced planning despite lukewarm reception to first film 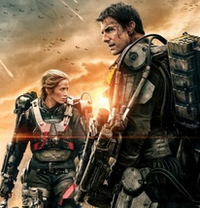 Raise your hand if you're one of the hundreds of people that saw the big-budget live-action adaptation of All You Need Is Kill, Edge of Tomorrow? If you didn't manage to catch it in theaters, you probbably remember it best for the home video release, which had the title changed to Live. Die. Repeat: Edge of Tomorrow in a stroke of marketing genius to ensure success.

Speaking to Collider, director Doug Liman let slip details regarding the status of the sequel as well as additional details including the finalized title and returning cast members:

As the principal actors and Liman are tied up in separate and concurrent projects, it's unlikely we'll see production commence anytime soon, but at least we know that Hollywood is still willing to mine Japanese IP, even if the movie did better outside of the US.

Tags
all you need is kill, edge of tomorrow
« Previous Post
Anime Idol! Which Male Anime Characters Should Be in Idol Groups
Next Post »
NHK Celebrates Track and Field Athlete with "Eiko-naki Tensai-tachi" TV Special
Other Top News
15 Comments
Sort by: