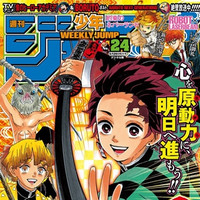 According to the latest numbers reported by Japan Magazine Publishers Association (JMPA) yesterday, the average circulation of Shueisha's signature manga magazine Weekly Shonen Jump in the period between January and March 2017 was confirmed as 1,915,000 copies.

The number was less than one third of its peak of 6.53 million in December 1994 when it had nationally popular series including Dragon Ball (Akira Toriyama), Rurouni Kenshin (Nobuhiro Watsuki), and SLAM DUNK (Masahiko Inoue). And it is the first time for Japan's top-selling manga magazine to dip in circulation below two million since 2008 when the association started reported the verified circulation numbers.

Circulation of other two major Japanese weekly shonen manga magazines have been also falling. Kodansha's Weekly Shonen Magazine, which had 4.36 million copies in its peak of 1995, now prints