Your OC Is Now Canon Thanks to "Sonic Forces" 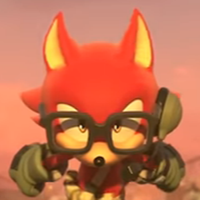 For all those Sonic the Hedgehog fans wishing they could see their original characters alongside our heroes in a game... now's your chance. The latest Sonic Forces trailers show the game's "Custom Hero" feature -- which allows players to create their own playable character for the first time in the history of the series.

The character creation function allows you to choose from a variety of colors, species, clothing, and gadgets to perfect your custom hero. A second new clip debuts Custom Hero gameplay on the Park Avenue stage:

The new game teams up two iterations of the speedy blue hedgehog to take back the world from Dr. Eggman. Players can play on 3D levels as Modern Sonic, and on old-school 2D platformers as Classic Sonic.

Sonic Forces will be available this holiday season for Xbox One, PlayStation 4, Nintendo Switch, and PC.