Character designed by Nakahara and voiced by Mamoru Miyano. 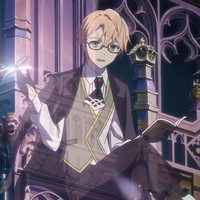 Aniplex of America has posted their second localized character servants promos for Fate/Grand Order (or reposted, since it was briefly online over the weekend). This time it's Assassin, designed by Nakahara and voiced by Mamoru Miyano. And, if you have a deep familarity with Fate/, you'll recognize him as the Beserker from Fate/Prtotype Fragments of Blue and Silver  a reiminaged version of Kinoko Nasu's original plan for Fate/stay night, written by Hikaru Sakurai and illustrated by Nakahara.

The Type-Moon inspired smartphone RPG is heading towards a summer English release.

In other F/GO doings, the social media campaign has succeeded in unlocking Saber Lily

Can you believe Saber Lily has already been unlocked?! Be sure to like the Fate/Grand Order FB page to unlock even more! #FateGOUSA pic.twitter.com/cscQPJPwnc