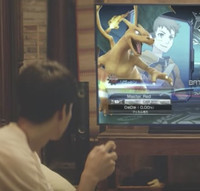 If you were hoping this morning's Pokémon Direct presentation would be a grand unveiling for the first proper home console Pokémon RPG, well, you might wanna dip out now. For everyone else, the chief attraction today was the reveal of Pokkén Tournament DX for Nintendo Switch, which is due out on September 22.

Pokkén Tournament DX will feature the addition of a playable Decidueye, along with Litten and Popplio on support, Group Match mode, Team Battle Mode, Battle Replays, and Daily Challenges.

For those unsatisfied with that announcement, The Pokémon Company quickly followed up with the reveal of Pokémon Ultra Sun and Pokémon Ultra Moon. These updated 3DS outings will feature an alternate story, newly-added Pokémon, and more, with a simultaneous global release on November 17.

The Pokémon Company closed out the Direct presentation with the announcement of Pokémon Gold and Silver for Nintendo 3DS. The ports will be available on the eShop the same day Pokkén Tournament launches, September 22.