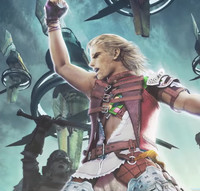 Square Enix has been releasing a series of Final Fantasy XII: The Zodiac Age trailers that offer up an efficient introduction to the game in 120 seconds each. Meet some of the main cast in a mix of event and battle scenes, including a quick look at Trial Mode and other additions, below.

Here's the first in the video series from back in April.

Final Fantasy XII: The Zodiac Age hits PS4 in the west on July 11 and Japan on July 13.