Two-hour special to air in Japan next month 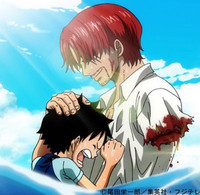 Last week we got a few screenshots and a visual as a small preview of One Piece Episode of East Blue: Luffy to 4-nin no Nakama no Daibouken, a two-hour TV special that recounts the series' early chapters on August 26. Now the official website is back with a brief 15-second promo for another dose of One Piece nostalgia ahead of next month's broadcast premiere.

FEATURE: 7 Anime-Inspired Burgers Of The Day Bob Belcher Could Add To The Menu