RPG-style game is out now on Yahoo! Japan's Games Plus Service 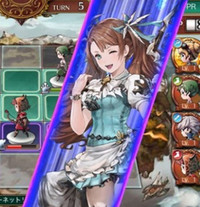 Square Enix said they'd be back on July 18 for more details on Antique Carnevale, but they did folks in Japan one better. The game is out now on Yahoo! Japan's Games Plus service, which means, yep, it's a browser game. More specifically, it's a strategic board game RPG that offers microtransactions on top of its free-to-play base.

Antique Carnevale blends fantasy RPG trappings with Chess-like gameplay that has players capturing territories on the board to trigger command-based battles. All you have to do to win each game is beat the enemy's King, and there are also scenario quests and summons in the mix.

We previously saw some of the voice talent that you'll be hearing during scenario quests, including the likes of Natsuki Hanae, Ayane Sakura, Yuuki Kaji, Yukari Tamura, and Yui Ogura.

If you missed them, you can check out all the character trailers here.