Beta registration opens up on July 26 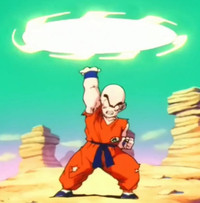 Over the weekend we got a look at the latest Dragon Ball FighterZ member in action with Trunks's debut trailer. He's one of nine characters that will be available to play as in the upcoming beta, and the new issue of V-Jump has info on the final two: Krillin and Piccolo.

For an example of some of the mechanics involved with these additions, players will be able to hold down a button to continue powering up Krillin's unblockable Destructo Disc. Players can also control chibi characters in the fighter's online mode and use them to battle against one another.

Beta registration opens up on July 26. With the addition of these two, here's the current roster: