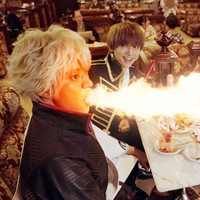 In commemoration of the success, special "support screening" events will be held in five cities in Japan (Tokyo, Osaka, Aichi, Fukuoka, Hokkaido) in August. Theatergoers will be allowed to wear silver or red wigs and glasses (full-cosplay and naked are forbidden) and to bring chemical light sticks and musical instruments. A newly-filmed special talk session footage by Shun Oguri (Gintoki Sakata), Masaki Suda (Shinpachi Shimura), Kanna Hashimoto (Kagura), and director Fukuda will

Meanwhile, Avex Broadcasting & Communications has announced that the first episode of the three-episode

web drama based on the "Mitsuba Arc" of the manga, which was premiered on NTT DoCoMo's online video

streaming service dTV on the same day with the film, was viewed over 2 million times on YouTube in its first

three days. It became the most watched web drama on dTV, attracting twice more viewers than the previous

champion Attack on Titan: Beacon for Counterattack in August 2015.