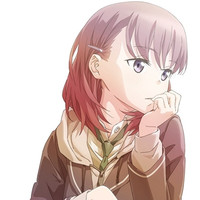 The official website for PINE JAM (Mahou Shoujo Nante Mouiidesukara)'s new original TV anime Just Because! today announced its five main voice cast, including 23-year-old Carin Isobe as the main heroine Mio Natsume. She is best known as the OP theme singer of the 12th PreCure TV series Go! Princess PreCure aired from 2015 to 2016. She made a guest voice appearance in the 40th episode of Princess PreCure along with the ED theme singer Rie Kitagawa, but Mio Natsume is her first leading character in a TV anime.

Just Because! is set to premiere on Tokyo MX, BS Fuji, and AT-X this October.

-A transfer student who comes back to his hometown after 4 years and reunites his old friends.

-Eita's best friends in their junior high. His workplace after graduation is already decided.

-Eita and Youto's classmate in their junior high. She has studied hard for her entrance exams for college.

She still can't forget about her one-sided love in junior high.

-Ex-member of her high school's orchestra club. She has already received a recommendation for a college.

-Second year student who belongs to the photography club with only three members. When she tries to

get a best shot for a photo contest in order to save the club, she witnesses the accidental reunion between