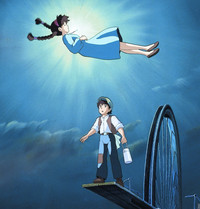 GKIDS and Fathom Events have been rolling through the Ghibli catalog with their theatrical events, and another Hayao Miyazaki classic is next. This time it's 1986's Castle in the Sky, which will be screening in theaters across the United States for a special two-day event on August 27 and 28.

Screenings on Sunday, August 27 will feature the English dub, while screenings on Monday, August 28 will present the film in Japanese with English subtitles. The dates were originally announced back in May along with initial plans for Studio Ghibli Fest 2017. The page for tickets is now live.

“Castle In The Sky” is a rollicking adventure about a young girl (Sheeta) with a mysterious crystal pendant who falls out of the sky and into the arms and life of young Pazu. Together they search for a floating island, the site of a long-dead civilization promising enormous wealth and power to those who can unlock its secrets. But greedy pirates, spies, and the army are also all in hot pursuit! As one of Studio Ghibli’s earliest films, and the first to be released officially under the studio’s banner, "Castle in the Sky" quickly established the studio’s reputation for strong heroines, unforgettable storytelling and beautiful artwork.