Award-winning manga to be adapted into anime 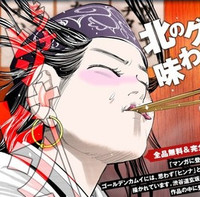 Golden Kamuy has it all. Men tough enough to earn the moniker "immortal." Cute girls. Legendary samurai. Exotic food. Now that it's getting an anime adaptation, Young Jump has been giving it plenty of promotion.

Check out the latest!

There was a promo from when it was collecting all the awards...

And a rap from a Shibuya Dogenzaka tie-in celebration!

Viz also made one to go with the manga's English release

In the early twentieth century, Russo-Japanese War veteran Saichi “Immortal” Sugimoto scratches out a meager existence during the postwar gold rush on the wild frontier of Hokkaido. When he stumbles across a map to a fortune in hidden Ainu gold, he sets off on a treacherous quest to find it. But Sugimoto is not the only interested party, and everyone who knows about the gold will kill to possess it! Faced with the harsh conditions of the northern wilderness, ruthless criminals and rogue Japanese soldiers, Sugimoto will need all his skills and luck—and the help of an Ainu girl named Asirpa—to survive.

Tags
golden kamuy
« Previous Post
Hotels for Crunchyroll Expo Are Selling Out!
Next Post »
"Your Name." Again Dominates Japan's DVD/Blu-ray Sales Charts in Second Week
Other Top News
0 Comments
Be the first to comment!
Sort by: