A SEEK at MEKAKUCITY event/web stream on August 15, 2016 celebrated the fifth anniversary of Kagerou Project 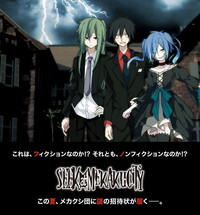 A SEEK at MEKAKUCITY event/web stream on August 15, 2016 celebrated the fifth anniversary of Kagerou Project, and this was capped with news that the popular series of songs by Jin (Shizen no Teki-P) that inspired the 2014 anime is set to return in a new, third album titled MEKAKUCITY RELOAD. The teaser for this has been published by edword records.

Jin also mentioned at the event that , more anime is still on the way and asked fans to wait a little longer.

Kagerou Daze No.9 Anime Set for Further in the Future After Screenings Are Delayed