The suspects are confirmed to have earned over 3.48 million US dollars in total 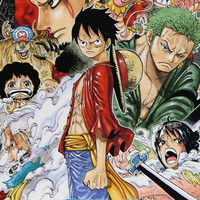 According to the police investigation, Uehara got copies of Shueisha's Weekly Shonen Jump and Weekly Young Jump at a so-called illegal "hayauri (flying-get)" store before the magazines' official

release day (Monday for Shonen Jump, Thursday for Young Jump), then scanned the pages of the two

manga to post on his netabare site between July 2016 and July 2017. Meanwhile, Hottai reposted the

One Piece manga images taken from Uehara's site onto his own netabare site.

numbers than the legitimate publisher Shueisha's official sites did. With the affiliate ads on their sites,

The two principal offenders, who were arrested on charge of copyright infringement (a violation of literary

property right), have already admitted to the crime. Hottai says, "I needed to pay my living expenses."

Shueisha has made a statement on the crime, "We are furious at the fact that the manga works created

suspects even made a profit from it. We hope that this arrest becomes a strong warning to the endless

pirate acts and illegal uses of our publications."

(before and after the official release day), onto the internet without copyright holder's permission is illegal

US dollars) in the worst case.