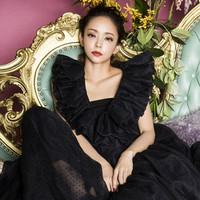 The One Piece franchises' official portal site One Piece.com announced today on September 12 that "Hope," a newly-recorded song by 39-year-old J-Pop singer Namie Amuro, will be used as the OP theme for the One Piece TV anime from the upcoming one-hour episode "Kanashiki Kettou (Sad Duel) Luffy vs Sanji" to be aired in Japan on October 1.

This is the second time for her to perform an OP song for the One Piece TV anime, following the 14th OP song "Fight Together" (episode 493-516). She also previously provided "Black Make Up" as the theme song for the TV special episode "One Piece -Adventure of Nebrandia-" aired in December 2015.

Amuro, who made her professional debut as a member of SUPER MONKEY'S in 1992, celebrates her debut 25th anniversary this year. She says, "I am really honored that I was offered to perform a

theme song again. I sang to express the bonds between the friends deepened through the voyages,

hoping it will be a limitless power and the light of hope to guide the answer to the future. I would be

happy if the song helps to enhance the charm of One Piece."

Tags
one piece, namie amuro, theme song
« Previous Post
Inside the Anime Fans Couldn't Help but Fund
Next Post »
Action and Style Abound in the First Trailer for the “URAHARA” Anime
Other Top News
6 Comments
Sort by: