Nissin and "Kemono Friends" Team Up For Foxy Noodle Collaboration 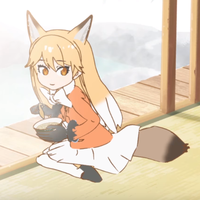 Most famous for its instant ramen, Nissin Foods also has an entire line of instant kitsune udon (wheat noodles served with a sweetened block of tofu) products, and now Nissin is teaming up with Ezo Red Fox and Silver Fox from Kemono Friends in a short, humorous video directed by Tatsuki.

In the video, Ezo Red Fox (voiced by Suzuko Mimori) and Silver Fox (voiced by Yuuka Aisaka) are having difficulty cooking their kitsune udon, which isn't "fluffy" like it's supposed to be. After seeing an advertisement featuring Nissin's mascot character, Ezo Red Fox convinces Silver Fox that the cooking might turn out right if she dances like the fox-girl on TV.