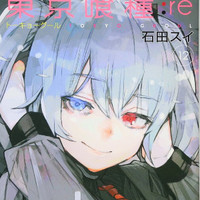 From an American perspective, October was already going to be a big month for Tokyo Ghoul. From Funimation, Tokyo Ghoul: The Movie is coming to select theaters 10/16-22 with English subs.  From there the launch of Tokyo Ghoul: Re is scheduled for October 17th. And, it looks like there is more going on beyond that.

Home manga magazine Young Jump is planning a major announcement with Tokyo Ghoul:Re. The end of the series and/or launch of a third manga? A third anime? The magazine will reveal the plans on October 12th.

Volume 13 of :re is scheduled to be released in Japan on October 19th.