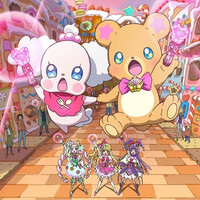 While girls from the past PreCure TV series are featured together in the "All Stars" films released in every spring, this is the first time for the 14-year-old franchise that the previous TV series' characters make guest appearance in the ongoing series' feature film edition released in fall.

Also, the next 37th episode of Kirakira PreCure to be aired on October 22 is confirmed to be a prequel story to the film focusing on the past of Ciel Kiraboshi in her training days in Paris. Her

Ciel to Paris with him. Then the story will directly continue to the film.

The film is set to be released in Japan on October 28, 2017, accompanied with a full 3DCG short film